The sweep of the red Sudanese desert, scattered with thorny trees and pierced by black basalt outcrops is the setting for this cinematic rule set. The whirling dervish, the fanatical Ansar and the lonely British foot soldier far from home are the combatants.

With these rules, you can take the role of the British commander tasked by the Queen with maintaining crown rule in distant, inhospitable lands or the local emir, committed to exercising his own free will over the natives who will fight with all their blood, sweat and tears.

Q&P is designed to balance the mass and ferocity of the local peoples against the technology and training of the Colonial powers and to provide a fair and reasonable struggle for both imperial General and local Emir.

* All rules necessary to play either a colonial or VSF version of the game.
* An alternative timeline for VSF genre play.
* Unit lists detailing British, British-colonial, Ansar, Beja and Cephalopod forces.
* A nine-scenario campaign that will allow you to play your way through the Mahdi's initial rebellion against Egyptian garrison forces all the way through to the siege of Khartoum.
* A quick reference sheet for most common information.
* A one-page how to do things to help you get comfortable with the rules.
* A blank unit command sheet.

Each of the scenarios in this rulebook is written to be fought as a pure colonial battle, but it is very easy to add a VSF flare to any scenario or battle you fight with this rule system. I have included an addendum (in italics) to each 'colonial' battle to allow you to make it a VSF battle. Play balance will not be affected by converting colonial battles to VSF battles.

The Rise of the Mahdi Scenarios: 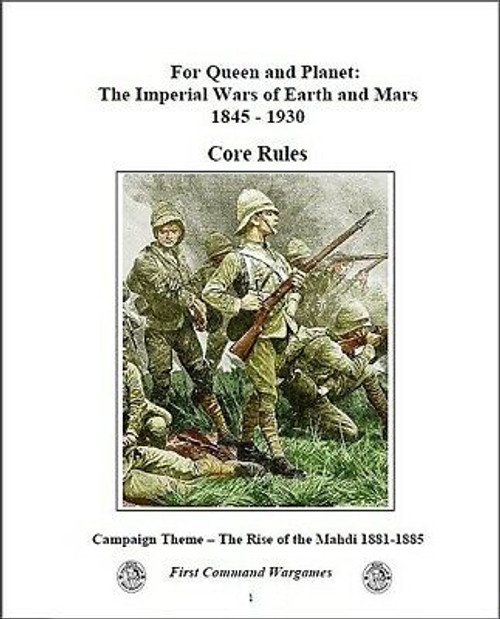